I'm sure my disappearing act went down a treat eh? Sorry for not blogging in like FOREVER - I just got so caught up with uni work and I then went trotting back to England for the half term. I've been back in Montpellier a week or so now but have been bogged down with another piece of homework and getting back in the swing of things.

I have a back log of outfits that I'm excited to share with you, a couple of new things that I bought whilst I was in England and a tag the lovely Louise from As Seen On Louise tagged me in. But before we get back into all that gubbins I thought I'd do a little updates post. Just imagine I'm a friend that you haven't seen in a while and I'm popping over for a hot cup of tea and a good ol' chat.

So first things first (I'm the realest), I flew out to England for my half term (yes you still get half term at university in France - not complaining) and stayed at my boyfriend Niall's in Canterbury who I hadn't seen in two months. I not only had to get a plane to England but I also had to make the two hour train journey from London Gatwick to Canterbury which only worsened the butterflies in my stomach. I was so nervous when I saw Niall that I was physically shaking and tried to blame it on the cold but failed miserably. Despite the traveling it was so lovely seeing him again and I do really miss him already - sorry for being soppy - safe to say we spent the first night with pizza and lots of cuddles. The next day got the train to his parents' house for a little get together for his mum's birthday where his dad made an awesome curry and special veggie one for me - what a babe. As well as being deliciously well fed it was nice seeing all of his family and friends including the little ginger one pictured above!


On the Sunday before me and Niall returned to Canterbury his dad treated us to a larverly roast that disappeared as soon as it was set down on the table. Although I bloody love eating in France and drowning in the many cheeses, it was so nice to have something familiar and hearty, ya know? After all you can never beat a good roast potato. Back in Canterbury it was nice to just have a wander, do a bit of shopping and be glad to wear a jumper finally!


Normally I love making my own costumes for Halloween but being in France and having to travel light meant it made more sense for me to buy something online and send it to Niall's house in Canterbury. So I decided to go as a pumpkin and managed to find a cheap outfit online which, unfortunately, I discovered to be far too short - why is it that all women's Halloween outfits are supposed to be 'sexy'? What on earth is sexy about a pumpkin?! Anyway, I managed to salvage it by wearing some cycling shorts underneath and maintaining my modesty. Although, either way, Niall's outfit definitely trumped mine. His housemate and him chose to go as a pimp and a prostitute, naturally Niall had to be the prostitute, haha. He actually ended up looking really good - this photo doesn't do his outfit justice - he's wearing leopard print leggings and my leather skirt. I know a bunch of feminists might want to jump on the fact that his outfit could be seen as sexist or insulting towards women but it really wasn't and was just a bit of fun.

As well as drinking a fair bit whilst I was in England I also ate a fair bit. And by a fair bit I mean a lot. Though the falafel wrap I bought was a major disappointment compared to the ones I have found here in France - just the thought of them has got my mouth watering. The day after Halloween I went to get my hair cut (which you will see in a mo) and then met up with Niall and his friends at the Beano Cafe in Canterbury and officially lost my Beano virginity. I got the veggie breakfast and, oh my, it was just like heaven on my taste buds - best hangover cure ever. If you're from Canterbury and haven't been to the Beano Cafe then you seriously need to, it is exactly what you want from a greasy spoon and more. I especially love how villainous Niall looks in the picture, haha, the poor boy hadn't taken his eyebrows off properly from the night before. He may have looked like a girl but he deffo doesn't know how to be one.

Back in France with early morning lectures, the only thing to get me through is the wonderful notion of 'la formule de petit-dejeuner'. For €1.80 you can get any type of coffee, a choice between a pain au chocolat or a croissant and a little orange juice. It's the best thing I have discovered so far. That and the cheese - omg the cheese. On the flip side one thing that is disappointing about France is that they don't celebrate Bonfire Night, which is pretty obvious as its an English thing. So, after a day filled with doing homework you can only guess of our delight when we found some sparklers in a supermarket. Cue getting childishly excited. Would have loved to go to an actual bonfire but we made do.


And finally as I mentioned earlier, I went to get my hair cut whilst in England as despite vastly improving my grasp on the French language I wasn't prepared to take the risk of going to the hair salon. Imagine if I had gotten a scissor happy French hairdresser and being unable to communicate 'just a little off the bottom please'?! Nevertheless, I am really please with it and as it is all one length now I shouldn't have to suffer with it flicking out too much.

Hope you have all be well in my absence. I am now about to spend the rest of the day reading all your lovely blog posts and relishing in the fact that its a bank holiday tomorrow. No American civilization class for me!


Because it's the best for underwear dancing.
Posted by Safiya at 07:41 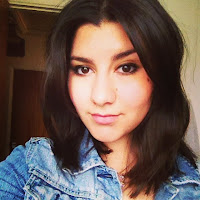